Procedures of the Glaucoma surgery

The most innovative laser glaucoma surgery is without doubt the Selective Laser Trabeculoplasty, known as SLT, available from the last 5 years but still not used in Italy.

Dr. Badalà performs this laser surgery for glaucoma in Milan and Catania. Laser for glaucoma treatment can be used in several ways, for example to avaid acute glaucoma with an iridotomy via Yag Laser or, for chronic glaucoma, with a trabeculoplasty laser surgery. 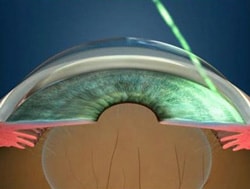 Glaucoma laser surgery called trabeculoplasty is meant to easy the acqueous humor discharge from the inside of the eye, lowering the overall eye pressure. Historically, the Argon Laser Trabeculoplasty was performed, also known as ALT.

This procedure is today outdated. The new procedure is called Selective Laser Trabeculoplasty or SLT: it is less invasive, more effective and has less risks. There is the possibility to perform a laser therapy with argon laser pupillopasty, only in selected cases of closed angle glaucoma.

Glaucoma surgery is suggested when medications and laser are proven to be non effective, eye pressure remains high and there is a progressive damage to the optic nerve.
In this cases, a surgical therapy is performed, that can have a minimally invasive initial phase with a surgery called TRABECTOME or via the modern miniaturized stents for glaucoma surgery (Ex-PRESS, Glaukos, etc).

Dr. Badalà has been the first in Italy to ever perform glaucoma surgery with Trabectome in 2007 and has a wide experience with this technique that has the goal of removing the
obstacle when the acqueos humor is discharged, removing the TRABECOLATO with an ab internal approach. 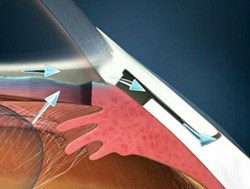 Mini stents in glaucoma surgery have the advantage of having less complications if compared to major glaucoma surgery. Anyway, their effectiveness is lower than the standard glaucoma surgery, that is the Trabeculectomy.
Trabeculectomy surgery (filtering surgery) aims to create a discharge passage that is alternative to the one affected by the disease, linking the area located from the iris to the cornea and the one located under a membrane called conjunctival membrane, that covers the ocular bulb. This surgery has to be performed by an expert ophthalmologist, in a proper enviroment, with a qualified staff.

First step is a local anesthesia and after surgery the eye is covered with bandages; eye drops have to be applied for a few days. Glaucoma surgery with this procedure is effective but may have complications if not performed by experts.

If Trabeculactomy fails too, the next step in glaucoma surgery consists in surgery with draining implants like the Ahmed valve or the Molteno shunt, or also the Baerveldt implant (this consists in the implant of a small tube for drainage, keeping the ocular pressure at acceptable levels).

Often, especially after a few years, glaucoma eye drops can cause discomforts. It is important to immediately contact a glaucoma center if this happens. 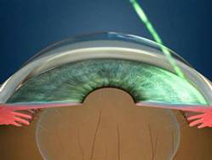 Today it is possible to stop the therapy thanks to a minimally invasive laser treatment called SLT or Selective Laser Trabeculoplasty. This treatment is suggested when medications start to interfere with the patient’s life quality.

Latest news for the eyes when curing Glaucoma

Innovations in glaucoma theraphy are: new medications like tafluprost, the new laser therapy called selective laser trabeculoplasty, the new glaucoma surgery with minimally invasive technique thanks to Trabectome or miniaturized Stents (such as glaukos or Ex-PRESS).
New applications for NGF (Nerve Grow Factor) are currently being researched for the optic nerve regeneration. 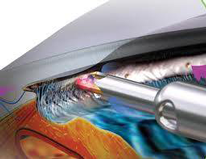 Glaucoma surgery is suggested when both medications and laser treatment fail to lower the pressure and it is possible to see a progressive damage to the optic nerve.
In these cases, it is usually performed a surgical therapy that could start as a minimally invasive procedure such as TRABECTOME or the modern miniaturized stents for glaucoma surgery (Ex-PRESS, Glaukos, etc.).

TRABECTOME makes it possible to remove the major obstacle to the acqueous humor flow, that is the trabeculate, while keeping the ocular bumb anatomical integrity and without creating a new 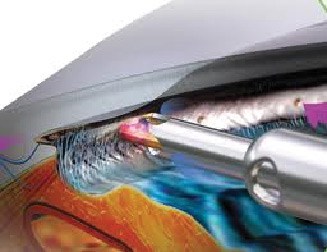 communication channel between the outside and the inside of the eye.
Dr. Badalà is the first italian doctor that ever performed glaucoma surgery with Trabectome in 2007 and has a wide experience with this technique that is meant to removing the trabeculate when the acqueous humor flows from the eye, with an ab interno approach.

Minimally invasive eye surgery has the advantage of having less complications if compared with traditional major glaucoma surgery. Anyway, it is often less effective than the standard glaucoma surgery, that is Trabeculectomy.