Maculopathy and its causes 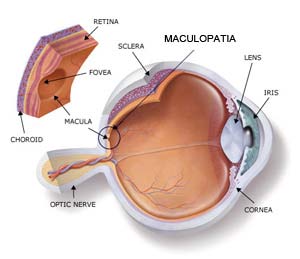 Maculopathy, or macular degeneration, is a disease related to the central part of the retina, called macula.

In any case, degenerative maculopathy never leads to complete blindness since lateral vision is usually preserved till the terminal phases of retinal maculopathy

Senile maculopathy, or macular degeneration related to the patient’s age, is the most frequent form of maculopathy, that affects 25 to 30 millions of people in the western world.
Other maculopathy forms are:

Maculopathy or macular degeneration is painless. It could happen that patients don’t notice any vision problem, because the healthy eye compensates. First symptoms usually are:

This is why it is best to often do the Amsler Test to monitor the vision status.
Such symptoms could be a warning sign and should end in an appointment to the ophthalmologist, the sooner the better.

Senile maculopathy, or macular degeneration related to the patient’s age, is the most common maculopathy. There are two kinds: dry maculopathy and wet maculopathy. 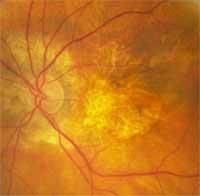 Dry maculopathy is the most frequent one. In 90% of maculopathies are dry ones: the retina gets thinner because vision cells stop working and disappear; for this form, also known as atrophic maculopathy, laser therapy has proven to be ineffective.

There is usually a small vision impairment and only in a few cases have been experienced atrophied zones that look like retinal stretch marks and also involve the central part (fovea).

In case of exudative maculopathy, it is believed that a small nutritive factors supply to the retina could stimulate substances called vascular endothelial growth factors (or VEGF), that give the signal for the production of irregular vases that seep serum or bleed, stimulating the formation of a scar. Proliferation of new vases under the retina is called choroidal neovascularization or CNV.

In the 10% of cases, neovessels grow in the retina and then deepen into the choroid; in this case we speak of a retinal angiomatous proliferation or RAP. 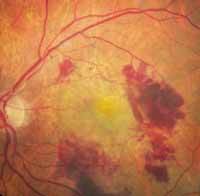 A variation (experienced in 3-4% of cases) called polypoidal vasculopathy, fosters bleedings under the retina along with the lifting of the pigmented epithelium (PED) and is often bilateral: it has a good prognosis though. A portion of dry maculopathies can become exudative over time, so it is important to monitor its growth. Moreover, treatments that succeed in closing such vessels cannot block relapses.

In the last years there have been several news in terms of maculopathy diagnosis and cure.
Today there is an early diagnosis thanks to the OCT exam, treatment to prevent maculopathy as well as a genetic test able to spot who’s at risk of maculopathy.
Maculopathy therapy uses modern medications and laser treatments that are constantly evolving. Dr. Badalà performs such treatments to cure maculopathy in Milan and Catania. 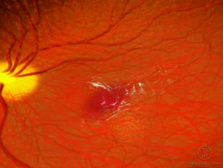 is a form of maculopathy linked to the patient’s age and it is characterized by a growth of a thin membrane on the inner side of the retina that could cause over time a distorted image perception.

Diagnosis is made with an accurate retina examination and an exam called OCT.
Usually it is not necessary to intervene to cure cellophane maculopathy; if the disease grows, it is called macular pucker. In these cases, the membrane becomes thicker distort the retina. Maculopathy cure will then be vitrectomy. 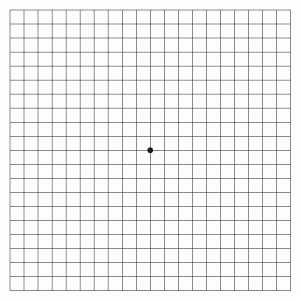 This is a very simple test that everyone can do in his/her home at any given time. The goal of this test is to spot as early as possible the metamorphopsia, that is the most typical symptom of degenerative maculopathy or macular degeneration. When speaking of metamorphopsia, we mean the deformation, curvature, distortion of everything that is originally straight (lines, door jambs, stair steps,…)

Usually this is noticed better while reading: the patient sees distorted lines on the newspaper, curved, or broken. Unfortunately this symptom is not always noticed as early as it should be: it may happen that patients recognize the condition only when the healthy eye is covered.

The Amsler test (or grid) is very useful when there may be a maculopathy or if you want to monitor the evolution overtime of a degenerative maculopathy. Who should do the Amsler test? Anyone who is at risk of developing macular degenerations, such as:

Dr. Badalà performed important researches and worked in some of the most important maculopathy centers in the world like the Wills Eye Institute of Filadelfia and the Jules Stein Eye Institute in Los Angeles, and is involved today in clinical studies on new treatments for maculopathy in Milan and Catania.

Meet us at our clinic

Meet us at our clinic